The pancreas is a large gland found in your abdomen behind the stomach. A gland is an organ that makes fluids or chemicals the body needs. The pancreas is about 6 inches long. 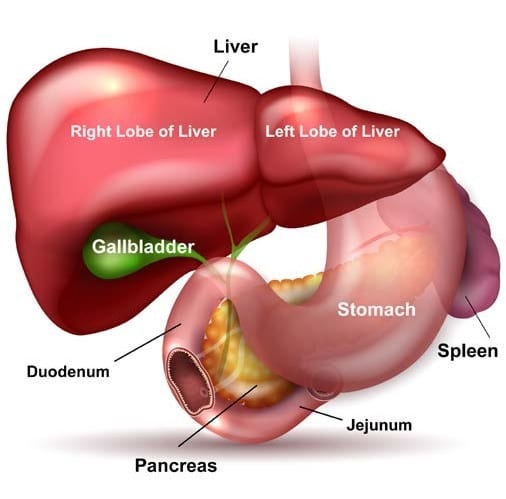 The pancreas has 3 parts:

The pancreas does 2 things:

What the pancreas does is important. The pancreas makes hormones, such as insulin. It also makes proteins, called enzymes, which help to digest food.

The pancreas lies behind the stomach and across the spine. It is in close contact with the liver, gallbladder, spleen, and duodenum (the first part of the small intestine). The liver removes waste from the blood and makes bile. Bile is a fluid that helps to digest food. The gallbladder stores bile from the liver. The common bile duct carries bile from the liver into the main pancreatic duct. From the main pancreatic duct, bile and enzymes empty into the duodenum.

The duodenum is the first part of the small intestine, which absorbs nutrients from the food you eat.

Depending on the size of the tumor and its location, surgery can be very difficult. Surgery will likely affect nearby organs, ducts, and tissues described above.