The cancer stage describes the extent of lung cancer in the body. Your doctor uses it for many things. It is used to assess the outlook of cancer (prognosis). It is used to plan treatment. It is also used for research. Your doctor may try to diagnose and stage cancer at the same time. This can be done by testing a body part that likely has cancer and is furthest from the lung tumor. By doing this, you’ll have fewer procedures. For some people, cancer staging is done twice. The rating before any treatment is called the clinical stage. The second staging is called the pathologic stage. It is based on tests of tissue removed during surgery. Sometimes, cancer outside of the lungs isn’t found until after surgery. 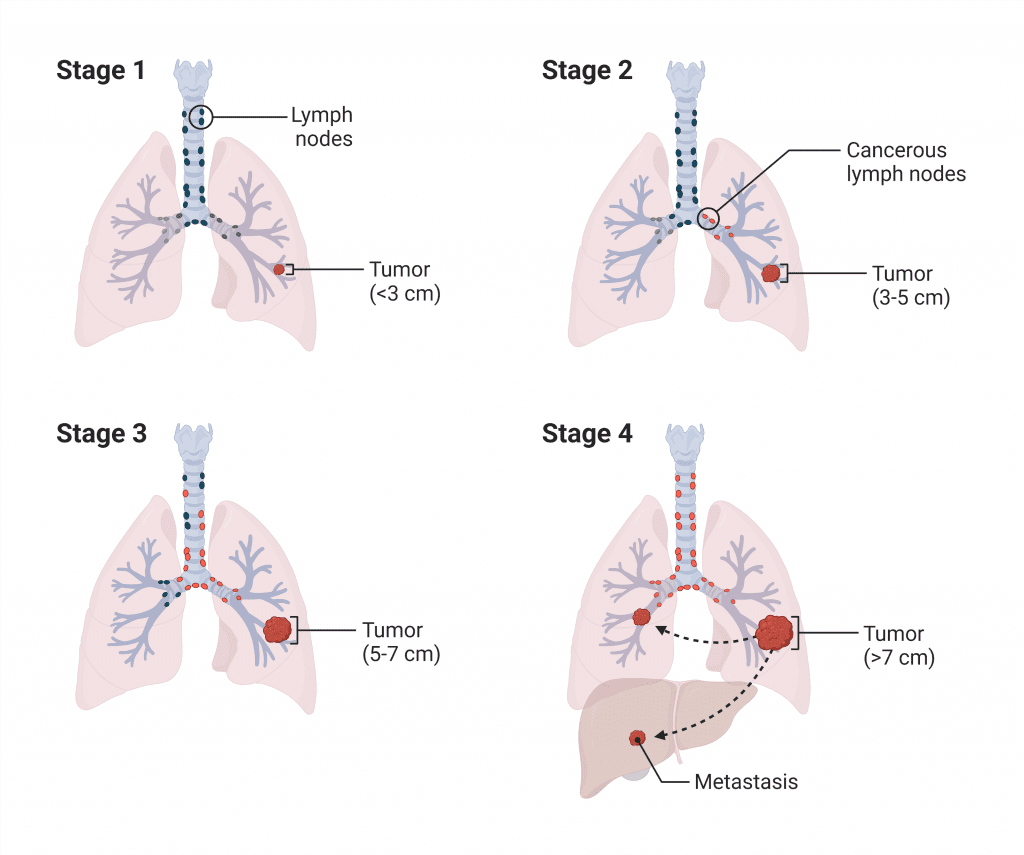 The AJCC (American Joint Committee on Cancer) staging system is used to stage lung cancer. In this system, the letters T, N, and M describe different areas of cancer growth. Your doctors will assign a score to each letter. The T score describes the growth of the primary
tumor. There are seven main scores—TX, T0, Tis, T1, T2, T3, and T4. The more serious the growth the higher the T score.
The N score reflects how far lung cancer has spread within nearby lymph nodes. There are five scores—NX, N0, N1, N2, and N3. The more serious the growth the higher the N score. The M score tells if there’s cancer spread to bodyparts far from the lung in which it started. M0 means cancer has not spread to distant parts. M1 means the cancer has spread to distant parts.

The TNM scores will be combined to assign the cancer a stage. The stages of lung cancer range from stage 0 to stage 4. Occult carcinoma is also included. Doctors write these stages as—stage 0, stage I, stage II, stage III, and stage IV.

Occult carcinoma
Occult carcinoma means a primary tumor was not found. Lung cancer cells may have been found in or mucus from the lungs. There are no signs of lung cancer in other parts of the body.

Stage 0
Stage 0 means there are abnormal or cancer cells in airways. The cancer cells haven’t grown into lung tissue or spread outside the lung.

Stages I–III
Stages I through III have grown into lung tissue. Some have spread to nearby lymph nodes. They have not spread to body parts far from the primary tumor. Letters and sometimes numbers are used to further group the stages. The subgroups give more details about the extent of the cancer.