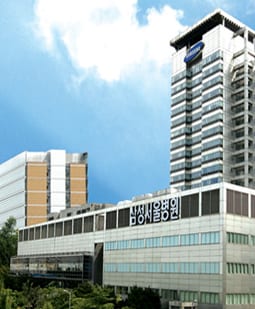 Overview -Samsung Medical Center opened in 1994 and has led the changes in Korea’s medical world covering all fields including diagnosis and treatment, studies, education and medical services, earning recognition from people as Korea’s representative hospital, one worthy of its reputation. In connection with this, the hospital in 2012 proclaimed Happinnovation 20*20 with a determination to realize a second takeoff, and making efforts to become a global top-level medical institution.

Samsung Medical Center plans to achieve medical innovation in the future to promote the happiness of patients and will develop into a global hub of biohealth care study and link the industry by connecting to hospital-R&D Center-school and enterprises. At the same time, the Samsung Medical Center will create the image of a new future hospital as a public medical institution that leads social contribution.

Samsung Medical Center, composed of a main building, annex and cancer hospital, improves infrastructure for future development. The Proton center was completed in 2014, and construction continues with a target to complete the future medicine hall in 2015 and Ilwon Station building in 2016, and the foundation work for the outpatient treatment center, scheduled to be completed in 2019, has already started on the west side site. By 2020, when the expansion of all infrastructure is completed, wards, surgery rooms, the intensive care unit, proton treatment center, and the future medical hall designed for research will be located on the main campus of the Samsung Medical Center. The west side site will house the outpatient treatment center, and the Ilwon Station building will house the college of medicine, research center and training center, creating the largest and best domestic medical complex covering all fields of treatment, research and training on a super-special site measuring 578,512.4㎡ in floor area.

The Department of Radiation Oncology at the Samsung Medical Center actively uses various treatment plan images, including CT, MRI, and PET-CT to precisely configure the target volume to treat, and has installed, and is running an MRI machine to plan radiotherapy treatment in the proton center. Also, for tumors that are affected by respiration such as those of the lung and liver, we use four-dimensional CT and devices dedicated to four-dimensional radiotherapy, such as Varian iX and Novalis TX, to minimize treatment errors.

This is a method to irradiate a small target with large amounts of radiation from various directions by precise alignment of the target using a three-dimensional co-ordination system. The Department of Radiation Oncology at the Samsung Medical Center uses the Novalis TX system, a device dedicated to stereotactic body radiation therapy, to actively treat lung cancer, liver cancer, and spinal cancer.

The proton therapy device accelerates protons, the nucleus of the hydrogen atom, using a cylindrical accelerator (cyclotron) to destroy cancer tissue, and is known as the “cancer treatment dream device.” The proton beam passes through the body without affecting normal tissue and delivers its maximum energy to the tumor tissue and then dissipates. Proton therapy can be applied to all types of cancers that are indicated by conventional X-ray treatments, and even though it is more effective than conventional radiotherapy, it has fewer complications.